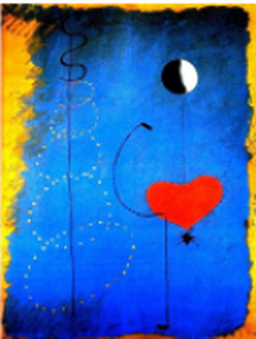 Joan Miro Ferra was an influential 20th century painter, sculptor, ceramicist and printmaker, who was born in 1893 in the Catalan region of Spain, near Barcelona. He began drawing as a young boy, and later attended a business school, as well as La Lonja School of Fine Arts. At the latter school, he was encouraged by two teachers; one encouraged him to revive the spirit of primitive Catalan art, combining it with modern discoveries and techniques.

Dancer of 1925,  is one of Miro's sparsest, but at the same time most poetic pictures. Having primed the canvas with brown paint, the artist then applied a layer of ultramarine blue in such a way that the brown colour was still visible in the form of an edge. The blue layer was added in broad, rapid movements, leaving spots and traces of the paintbrush to indicate the sweeping movements of the painter's hand. Miro himself was very fond of this painting which marked the beginning of an important phase in his development as an artist.