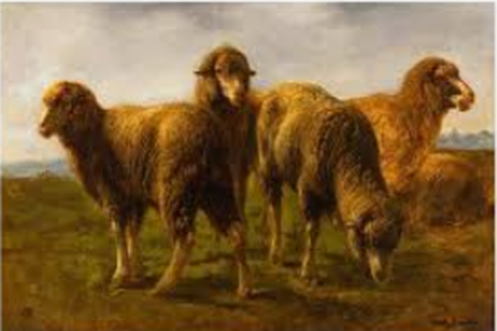 Rosa Bonheur, ​the most popular artist of nineteenth-century France, was also one of the first renowned painters of animals and the first woman awarded the Grand Cross by the French Legion of Honor. A professional artist with a successful career, Bonheur lived in two consecutive committed relationships with women. Born on March 16, 1822 in Bordeaux, Marie Rosalie Bonheur was the oldest of the four children of Raimond Oscar Bonheur (1796-1849) and Sophie Marquis. Bonheur's father was an art teacher who came from a poor family, while her mother, a musician, had descended from a middle-class family and had been her husband's art student.

Sheep Graving in the Meadow, 19th century, oil on canvas, is a depiction of a flock of sheep grazing in a meadow flanked on the left by a vine-covered tree with an orange-winged butterfly, one of the most famous paintings by Rosa Bonheur.​