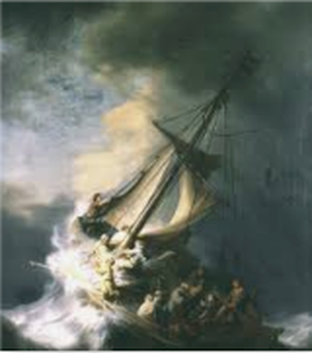 The Storm on the Sea of Galilee
Rembrant van Rijin

Rembrandt van Rijn, in full Rembrandt Harmenszoon van Rijn, Rembrandt originally spelled Rembrant, (born July 15, 1606, Leiden, Netherlands—died October 4, 1669, Amsterdam), Dutch Baroque painter and printmaker, one of the greatest storytellers in the history of art, possessing an exceptional ability to render people in their various moods and dramatic guises. Rembrandt is also known as a painter of light and shade and as an artist who favored an uncompromising realism that would lead some critics to claim that he preferred ugliness to beauty.

The Storm on the Sea of Galilee is a 1633 oil-on-canvas painting by the Dutch Golden Age.